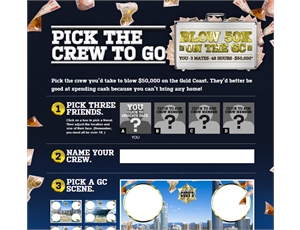 Cody's were running a competition for their customers - "Blow 50K on the GC". The winner had 48 hours with 3 friends, to spend $50k on the Gold Coast of Australia. To win, they had to create their "crew" online, and include a code from a box of Cody's.

We implemented the design provided by Barnes, Catmur & Friends into a Facebook app for the Cody's facebook fan page. We integrated a number of Facebook elements into the app using the Facebook Javascript API, including a friend picker, and share functionality. We also took the profile photos of the friends that the user had picked, and a "crew name" that they chose, and did some tricky coding (using Windows GDI+) to display a "crew photo" in real time - which was then saved and shared to the user's and friend's walls.

CareNet
Care on Call and Medcall